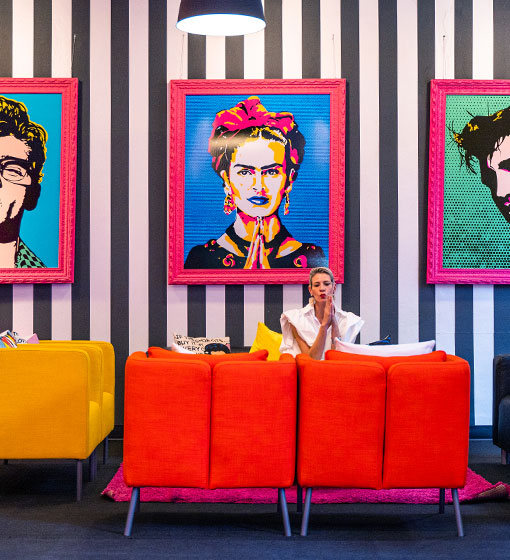 Immerse yourself in a mixture of art, music and fashion.

Live the unique and rebellious experience of a Pop Art and modern art decor. Feel gorgeous by surrounding you with magic, beautiful and seductive colors. The first thematic hotel in Ponce will even integrate a vintage-modern cuisine that will transport you in time with a variety of burgers, shakes, sweets and the best coffee in town.

During the 1920s, a group of Ponce residents who regularly met at the home of Pedro Juan Serrallés to enjoy silent movies decided there was a need for a theater in the town. In 1928, Pedro Juan Serrallés acquired a property facing Las Delicias Plaza for the purpose of building a theater.The former Fox Delicias Theater, designed by Ponce architect Francisco Porrata Doria, was inaugurated in 1931.

The name Fox Delicias arose from a contract with the film production company Twentieth Century Fox and the theater’s location in front of Las Delicias Plaza. For generations, it was Ponce’s main stage for shows and its movie theater. It was later sold, which undertook a renovation of the theater in 1989 for the purpose of converting it to business space.

what figures are saying

It's beautiful! I love pretty much everythig about The Fox Hotel. My kids always ask me "when are we coming back?".

It's a great experience, the atmosphere feels amazing, and been surrounded by those colors gives you energy, overall is very inspiring. Recommended for new artists and art lovers.

The first thematic hotel in Ponce will even integrate a vintage-modern cuisine that will transport you in time with a variety of burgers, shakes, sweets and the best coffee in town.